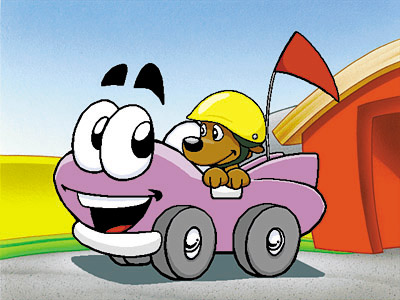 Welcome to the PuttPedia! The Free Encyclopedia dedictaed to the series of adventure games and car hero Putt-Putt. From his faithful dog being lost ina unruly time machine to its discovery on the moon. To The Parade in town or the trouble at the circus Putt-Putt always saves the day and realizes the difference between needs and wants. PuttPedia travels through time...

Smokey The Fire Engine first appeared in Putt-Putt Joins The Parade and became a recurring guiding character who deeply cared for the purple car bound to his duties and dog.

He appeared again in Putt-Putt Saves The Zoo, Enters The Race and Finally Joins The Circus.

He is a large red-truck who owns the fire station in Cartown.

Retrieved from "https://puttputt.fandom.com/wiki/Putt-Putt_Wiki?oldid=4039"
Community content is available under CC-BY-SA unless otherwise noted.